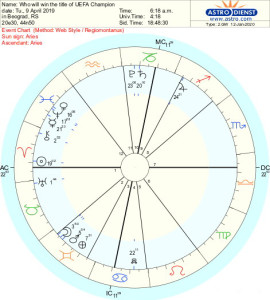 Before the Quarter-Finals-1st leg of the UEFA Champions League, on 8. April 2019., "LLM", member  of the Astrologers' Community Forum, in the "Sports Astrology" section  asked this question:

I cast the chart for the moment I read his question:

In this type of question Frawley in his book "Sports Astrology" suggest: "Look  for the planet that first aspect lord 10, or, failing that, has immediate conjunction with  the MC. That planet describes/represents winning player/team.
Here lord of the 10th house is Saturn and Sun is planet that first aspect it. As Sun is in Aries that means that will be some team from UK. Because The Sun is in connection with red color and Aries also, I think Liverpool will be the winner because their nickname is "The Reds". 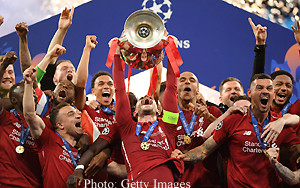 On 1. June 2019. on the https://www.standard.co.uk website you could read the following:

Reds beat Tottenham 2-0 in Madrid to lift their sixth European Cup. Liverpool have won the 2018-19 Champions League after Mohamed Salah and Divock Origi earned the Reds a 2-0 victory over Tottenham in Saturday night's Madrid final."
Collapse